This article describes how battles play out in the The Banner Saga.

Battles in Factions share a lot of common aspects with the single-player game so, in the end of each section, the differences of the two games will be highlighted and discussed. 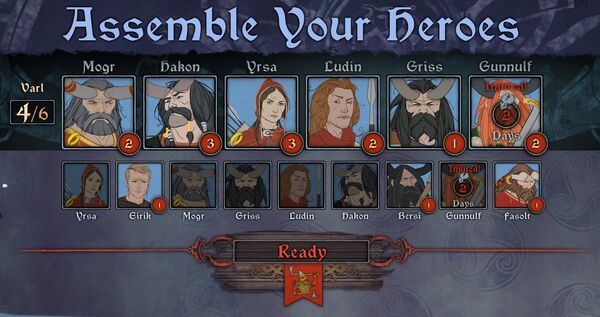 Whenever a battle is about to be engaged, you are firstly directed into the 'Assemble Your Heroes' screen. Here, you can select the heroes you are going to field in the imminent battle. You can have up to 6 heroes in your 'roster', which displayed in the top row of the screen. The portraits of the currently available heroes are displayed in the second (and third) row of the screen, where the greyed-out ones are already in your active roster. Using drag-and-drop you can add or remove heroes from the roster or change their acting order; the first hero to act is the one on the left.

When you are done, click on the 'Ready!' button to proceed to the battle itself.

In Factions, you prepare your team in the Proving Grounds and there are no such features as injuries or items. Also, restrictions apply for the number of units you can bring in your team:

Finally, a Power is applied to each team in Factions, which equals the sum of the Ranks of the six units and ranges between 0-18. For fairness' sake, the game's Matchmaker usually pairs you against a team of equal power.

After you have assembled your heroes and passed through the loading screen, you are transferred into the battle field. The enemy-unit positions are revealed and you are required to deploy your units anywhere you want on the zones marked with the blue tiles. Click on any ally unit (or on its portrait) to select it, and then click on a valid blue-tile to place it. Deployment is not time-limited.

When you are done positioning your units, click on the Ready! button (top of the screen) to proceed to the Battle.

These are the difference of the deployment phase for Factions (compared to the Saga):

Description of the HUD

In the first part of The Banner Saga, you must knock-out all enemies to win a battle; the same goes for the enemy team! There is only one battle in the game with a different Victory objective...

In the second part of The Banner Saga, several battles have alternative Victory conditions (objectives), for instance:

The defeat condition in story battles is always the same: Have all your Heroes knocked out. Training Scenarios can be failed in various ways.

References to tactics, strategies and other helpful material. For example: Guides:Tactical Strategies