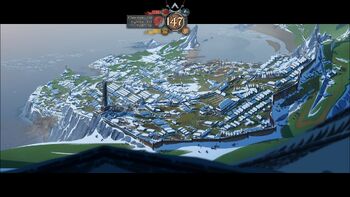 Boersgard is a major human city.

An aging and senile mess of a city that can't remember whether it wants to sell you something or steal everything you've got. While Ormsdalr grew early into an important hub of trade, its twin city Boersgard became the place to buy things nobody else was willing to hawk. It's greatly supported by the potent items harvested in Reynivik and Tistel, and plagued by huge disparities between the extremely rich and the suffering poor.

Located along a large lake in the kingdom of Stromlund, Boersgard is a large and well fortified city that appears to be mostly inhabited by humans. Somewhat of an economic hub, it has a port that is used for commerce with other cities throughout the kingdom of men. Though it is the second-largest human settlement (bested only by Arberrang), Boersgard has a bad reputation among humans, having become known for being full of cutthroats and poverty.

The city is also the founding place of the Mársmidr gang, which was originally formed by Freystein and a group of former watchmen dismissed from their positions for corruption. After the watchmen slew a bartender for insulting them, they and Freystein fled Boersgard for Strand in order to avoid the authorities.

Boersgard is the final destination of Rook's caravan in The Banner Saga. After leaving Sigrholm, Rook leads the caravan to Boersgard, believing its fortified walls provide the best chance at survival against the oncoming dredge horde.

Upon entering, Rook finds the city on the brink of chaos. With most of its citizens having fled, the Ravens, an infamous mercenary company led by Bolverk Bloodaxe, have been hired by the Governor (Rugga) to hold the city together. Since the boats in the ship's harbor are already gone, Rook, Eyvind and Iver decide that their only hope is to construct boats and sail down the Ormsa River to Arberrang. More Dredge arrive to besiege to city with every passing day, while supplies are running out and widespread riots are tearing the city apart from the inside.

The player will be forced to hold out in Boersgard for several days, holding off the Dredge hordes at its walls to give the Ravens time to build ships. Each day, the player will be given a set of choices, including defending the clansmen in the player's party, fending off the dredge at the walls, and finding more supplies for the caravan. Failing to find a place to stay for the caravan will result in clansmen deaths, while failing to help defend the walls will cause the player's warriors and varl to be slain. Assisting with defending the walls will lead to the party participating in a difficult combat encounter against the Dredge.

After several days, Hakon will arrive at the city with Juno, accompanied by a considerable Varl force that left Einartoft before its fall. Bellower will arrive shortly afterwards, threatening the city with imminent destruction. The heroes are forced to face him, relying on a desperate plan devised by Juno...

"As we pass steep cliffs, the sprawl of Boersgard comes into view. A city of contrasting rich and poor, opportunity and gamble. Our best hope for salvation, or our graves." — Rook, The Banner Saga, Part One, Chapter 6.