Bolverk, nicknamed Bloodaxe, is the Varl Berserker leader of the Ravens, a mercenary group of fearsome reputation. He is briefly encountered as an NPC in Chapter 7 of the first game, becomes a central (POV) playable character in the second game and is an antagonist in the third game.

In the first part of The Banner Saga, the Ravens are in charge of the defense of Boersgard until Rook's caravan reaches the besieged city, in Chapter 7. They are employed by the Governor of Boersgard (Rugga) who knows his people will soon revolt and has gone into hiding, charging the Ravens with guarding the city and protecting him. When the Dredge tighten the siege, the Ravens begin to tear down buildings to build boats to carry themselves, the Governor and Rook's caravan away from Boersgard. However, when the townsfolk realize they won't be able to come along, they begin to riot. The Ravens try to keep them under control while also holding back the Dredge besiegers.

Bolverk is one of the two major POV Hero characters of the game. In Chapter 15 however, he becomes an antagonist.

Practical and prone to violence, Bolverk leads the mercenaries - known as the Ravens - with absolute authority. His rage is a weapon; his oath is unbreakable.

Bolverk becomes a wild animal on the battlefield, hunting down the weakest of his opponents and driving himself to greater Renown with an additional Turn for every Kill. As long as he has Willpower and continues to kill targets, Bolverk can continue to use this ability each Turn, cutting a swath through the battlefield.

Rank 1: Attacks one target; his Strength suffers a -2 penalty for Damage calculation only.

Rank 2: Attacks one target; his Strength suffers a -1 penalty for Damage calculation only.

The Berserker whips himself into a fury, terrifying nearby enemies and sending them fleeing in disarray. Affected enemies are so shaken they suffer a penalty to their Armor for one Round. Additionally, the Berserker counter-attacks any melee blows from enemies brave enough to strike at him.

Rank 1: All adjacent enemies suffer a temporary -1 Armor penalty and move 3 tiles away from the Berserker; Frenzied counter-attack.

Rank 2: All adjacent enemies suffer a temporary -2 Armor penalty and move 3 tiles away from the Berserker; Frenzied counter-attack.

Rank 3: All adjacent enemies suffer a temporary -3 Armor penalty and move 3 tiles away from the Berserker; Frenzied counter-attack.

The Berserker first attacks the enemy target's Armor or Strength, as directed, then does a Strength attack against a random adjacent target, friend or foe.

Because the second attack strikes a random target, care must be taken around allies, but if only a single target is in range, that target will always receive both attacks, guaranteeing a double strike...

Bolverk is slowly corrupted throughout the game by Bellower's Dream and adapts his personality. In Chapter 15, it regenerates his armor and strength for 4 points each round. This buff however disappears when he is struck by Eyvind's lightning.

Bolverk is a lead (POV) character in the second part of The Banner Saga, playable in Chapters 9, 11 and 13.

There is no event leading to Bolverk's death in the second part of The Banner Saga, however he does suffer a certain... condition.

Bolverk becomes a major antagonist in the third game, after being revived by the Serpent. He leads the Warped hunting Iver and the Ravens. At Ridgehorn, he will confront the party, but Folka will try to reason with him. If you don't push her away, she will die.

His attacks will be highly damaging when you face him in the final fight at the White Tower. He will also be accompanied by Warped Dredge.

When he confronts you, you have the option to let him talk or headbutt him. The former will result in a wave battle, with Bolverk coming in the final wave. In the latter case, you will have to fight just one group including Bolverk himself.

The floating crystals in the area can be shattered to wound both him and the Warped , as the crystal shards will fly in the direction opposite to which they are hit.

You do not have to defeat him however. If you lose, he will slaughter all the Ravens but Iver, Juno and Eyvind will manage to flee.

The only difference losing to Bolverk makes is locking out the ending with Alfrun being able to perform the ritual in place of Eyvind, in order to stop the Darkness from destroying the world. 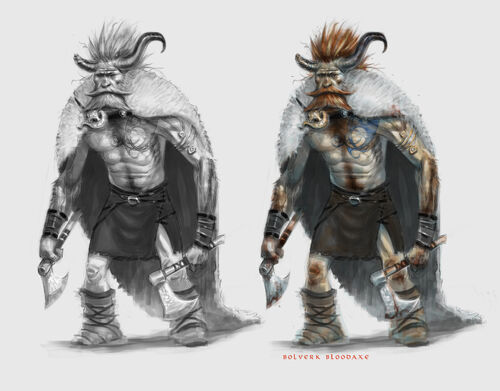