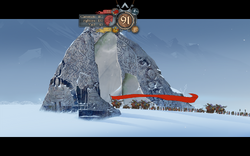 The godstone of Dundr passes around you. In the frozen climates here it looks like the rock has split and is falling apart, held together only by the deep snow. Curiously, when standing between the stones the wind drops off completely, picking up again once you've passed through.

Along each strand of Dundr's massive beard is carved a different part of his story, and you turn your head to and fro to read it. While the Loom-mother was the first to create, she soon found a counterpart in Dundr, who embodied her ideals in a masculine form. Dundr took some of her creations and gave them beards and showed them the secrets of smithing, though many remember him just as fondly for teaching them games and songs of mirth. 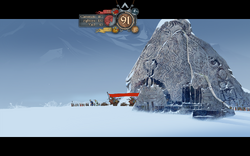 Puzzle box of the Twin Rivers