Edit
watch 01:54
Obi-Wan Finale - The Loop
Do you like this video?
Play Sound

Eternal Arena (EA) is an extra gameplay mode available in The Banner Saga 3.

In the arena, the location, the rules, the enemies, and your heroes are all customizable by you. Create and save your arenas and battle again and again to learn new skills or explore previously impossible ideas! Each week you may participate in our Eternal Challenge! Fight in the Challenge for your place on the Eternal Arena leaderboards to prove your heroism, skill, and tactical prowess!

To play, simply click on the Eternal Arena banner on the start screen:

In game, the leaderboards show the top players for the current and previous Eternal Challenges, as well as the players who have achieved the highest score in a challenge among all other players.

Create Your Own Arena[]

The 'Create your own Arena' button will take you to the Arena Setup screen. The screen is divided into three sections:

Each section offers a button to 'Randomize' your options, a 'Save' button to save your settings for later use, and a 'Play' button to try out your arena. 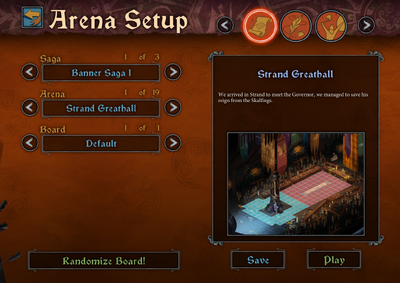 The saga lets you choose between Banner Saga 1, 2, or 3. This option filters the Arenas that are available to you (next setting). Which heroes, enemies, or items you use is selected on the Combatants screen.

'Arenas' are the various battle scenes from the Banner Saga series, filtered by the current Saga (previous setting). For example, for Saga1, one of the first Arenas is the [Strand] Great Hall.

Each arena has one or more boards that are available to that scene. 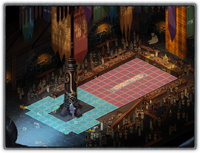 Each board is unique to the Arena (battle scene) it is on. Each board specifies the hero and enemy starting positions with blue and red tiles in the thumbnail. Some boards allow for wave battles.

If available for the Arena you whose (second setting), the Waves option will appear. Here you may toggle the wave battle system OFF or ON. If ON, you will be faced with extra waves of enemies. Be sure to bring extra heroes to the battle! 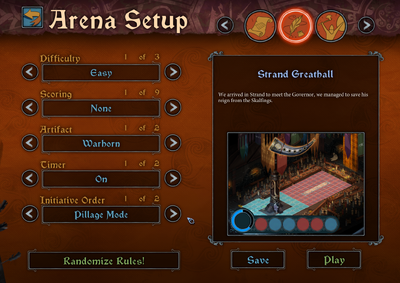 Rules has 5 options for you to choose:

Allows you to select Easy, Medium, or Hard which affects enemy difficulty just like in the regular game. There is a 0%, 20%, and 50% bonus multiplier to your score (see following setting) for Easy, Medium, and Hard, respectively.

There are 9 different scoring options to choose from. Each offers a different bonus based on certain conditions you should try to achieve in battle.

There are 6 basic scoring subtotals that will affect the overall Arena score:

Your total score is the sum of all 6 of your subtotals.

No bonus scoring! Your final score will be determined by your Victory Bonus, Turn Penalty, Enemy Kills, Hero Death Penalty, and the Difficulty Bonus multiplier only.

We take the triangle number of the total heroes without items that fought in the battle.

Heroic titles grant your heroes an exceptional bonus. Gain a bonus per hero without a heroic title. The bonus' multiplier grows faster the more heroes you send into battle without an item!

We take the triangle number of the total heroes without titles that fought in the battle.

Each hero that is in more than one wave gives you a large bonus to your score. The more waves they are in, the larger the bonus!

You'll gain a bonus with attacks that do a lot of damage. The bigger the hit, the bigger the bonus. Small hits for only a few points of damage won't help you here!

We take the triangle number of the number of hits that do at least 8 points of damage and multiply that by 15.

A Battle of Strength[]

In this battle of strength, each hero and enemy will regain 1 STR on their turn and 4 STR per kill! Your bonus increases for each enemy killed with a basic STR attack.

We multiply the number of kills caused by a regular strength attack by 500.

A Battle of Will[]

In this battle of will, each hero and enemy will regain 1 WIL on their turn and 4 WIL per kill! Your bonus increases for each enemy killed with an ability.

We multiply the number of kills caused by abilities by 500.

A Battle of Motion[]

We multiply the number of tiles moved by players and enemies by 100.

You may toggle the timer off and on. When on, it behaves as in Survival Mode and you will have 30 seconds on each hero's turn to move them and have them attack or use an ability.

You may toggle between Alternating (as in the story mode) or Pillage (as in Survival Mode). 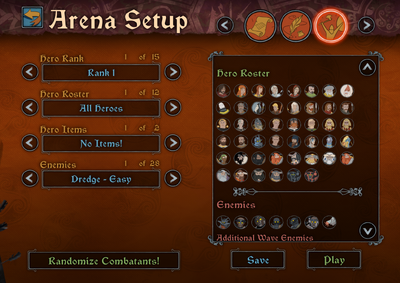 Combatants is where you define the parameters of your Party and the Enemy.

You may choose the Rank of your heroes from 1 to 15 (all heroes will have the same rank). The hero rank affects your choice of Hero Items as well as the danger level.

There are several different hero rosters to choose from, including a roster with the heroes from every Banner Saga game!

This is a YES or NO toggle. If set to YES, all items are potentially available to you, effectively limited by the Hero Rank you chose (first setting).