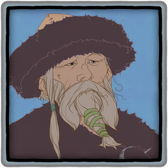 Hadd is a non-player character appearing briefly in the first part of The Banner Saga. He is a merchant making his living in the marketplace of Strand.

Rumors say Hadd used to be a member of the Skalfings, an uneasy clan at odds with the Governor of Strand. After the Skalfing Chieftain's plans to overthrow the Governor are thwarted, Eirik, steward of the Governor, questions him about the possible whereabouts of any Skalfings remaining in the city.