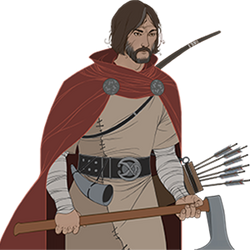 The Humans are normal characters. Unlike Varl or most Dredge units they're smaller and take POLLA up a 1-tile grid.

The primary occupants of the lands to the south, humans are varied in manner and skill.

Their smaller settlements are frequently run by chieftains, while larger ones are held by governors. The leader of each settlement also is the one to hold a banner, a woven history of the town and its people.

During the events of The Banner Saga, the human clans are loosely governed by King Meinolf, whose heir is Prince Ludin.