Morale is an important attribute of your Caravan that primarily affects the Willpower (WP) of your units in Battles:

These change can turn the tide of battle in your favor quickly, as you'll have extra points to spend on movement, attacks or special abilities. 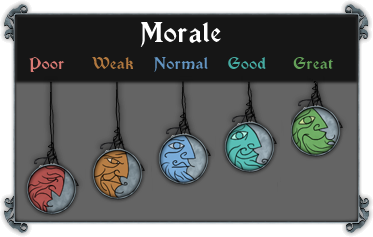 The caravan's morale is affected by several factors:

The state of the Morale is measured by a "counter" ranging between 0-100 points. Each of the five Morale states depicted in the figure correspond to specific value-range of the counter. Refer to the following table: