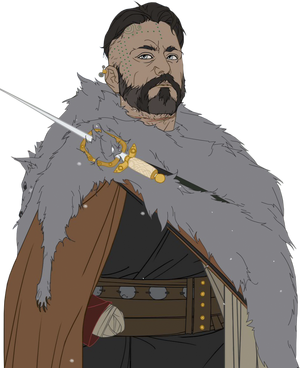 Rugga is a character in The Banner Saga 2 who plays the devil's advocate (or devil) by your side, always rooting for "the people". His political dung attracts all the nastiest flies, like Dagr. We hear about him for the first time in The Banner Saga as the Boersgard governor.

Rugga is an ambitious and ruthless man who will do anything to gain power. Sometime before he became the governor of Boersgard, Rugga tried to take the throne of the human kingdom in Arberrang, the human capital, when he organized a huge coup against the government of King Meinolf. His plans were foiled due to Petrus, recently promoted to the king's guards' captain. He lost his right hand and received a scar across the throat during the coup, later being exiled.

Rugga had been the governor of the second largest human city, Boersgard, before the dredge arrival. Shortly before the Bellower's siege, Rugga withdrew into his great hall. Meanwhile he recruited the mercenary army known as the Ravens to re-establish order in the scared city, after the riots and disorders had led most of governor's soldiers to death. Right at this moment that Rook and his caravan came to Boersgard, meeting Bolverk, the legendary leader of the Ravens.

After the city was saved, Rugga accompanied the Hero of Skogr and his caravan to Arberrang, advising them along the way in power politics. After they reached the capital, they encountered a large number of desperate people who had traveled from all over the continent to seek refuge but were barred from entering. Rugga won their support for staging a revolt against Meinolf too gain refuge, while secretly planning to take the throne for himself.

Regardless of the actions of the Hero of Skogr, Meinolf was poisoned by Rugga's blade when he is stabbed by Rugga during negotiations. The menders were unable to find a cure, as the poison affected Meinolf's mind -- the only part of the body menders were unable to touch. A halt to all fighting was ordered by the king and everyone was allowed to seek shelter in the city, but Rugga was required to be imprisoned. The king asked the Hero of Skogr to request the antidote from Rugga, but before they could, the city walls were attacked by the Sundr Ruin.

While Ruin was still trying to destroy the walls so all the dredge could take the city, the king Meinolf died in his sleep and Rugga's band of loyalists started rebelling. Petrus requested the Hero of Skogr to put an end to this by convincing Rugga. Regardless, his loyalists kept creating trouble for those defending the city from the dredge.

In The Banner Saga 2 can impress Rugga by making decisions that are expedient and well-thought out. Doing a number of them will result in him being happy and you will receive a certain amount of Renown. At the end of the game, you'll have to side with him or the king Meinolf.

Regardless of your choice, every refugee will be allowed to enter Arberrang during the events of The Banner Saga 3. Meinolf will request you to find a cure from Rugga, While being interrogated by you, he will lay out his plans. At this point, you can either spare him or beat him to death.

Letting him live will result in him being broken out by his loyalists and will create trouble for your caravan. You'll have to fight his loyalists but he'll stop them once Zefr informs them to let the Dredge in or they will become Warped due to the Darkness, putting the city in an even greater danger. He will let you make peace with the dredge if you want to.

Rugga is lodged in a jail once you fight off a band of his loyalists in Chapter 16. You can kill him in Chapter 18 after Meinolf dies. He will die if you return to Arberrang for the fourth time in Chapter 21.