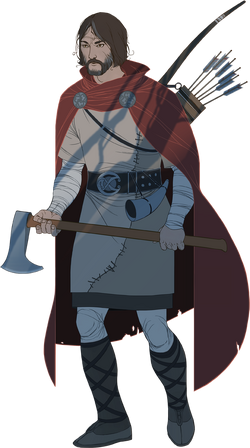 As of Summer 2018, three stand-alone video games set in the world of The Banner Saga have been released:

There is also a tabletop miniature board game in the franchise

This article principally refers to the single-player game trilogy and usually to its first part, often referred to as The Banner Saga (without a number) which should not be confused with the entire trilogy.

Here is a list of websites to purchase/play The Banner Saga video games. System requirements for each platform can be found therein.

Not another generic fantasy: Drawing heavily from Norse culture while creating its own identity and mythology, The Banner Saga takes a low-fantasy approach to viking themes. Giants: yes. Horned helmets: no.

Recruit a large Roster of unique characters throughout the story, each with different abilities that interact in combat in a deeply tactical way and personalities of their own. The Banner Saga harkens back to classic turn-based gameplay with a strong emphasis on tactics over brute force and endless grinding.

The choices you make as events arise have a huge affect on how the story plays out- who survives, who dies, and what's worth saving. Add people to your caravan as you travel, or lose them when tough decisions arise. You're not just fighting to save nameless strangers, you're fighting for your neighbors, your family and your way of life. We want you to care what happens to them.

Your choices in dialogue and throughout the game truly affect the story and the people around you. A mature story for adults means forming relationships and making tough decisions; not sex, violence and swearing.

Though the single-player campaign is our focus, The Banner Saga: Factions provides a deep multiplayer game; build a unique party of characters and battle friends and enemies in multiplayer combat. Upgrade your party over time and devise new strategies.

A lot of modern games play it safe- you know you'll defeat the evil and save the day. In The Banner Saga you can't take anything for granted. We want it to feel like a good TV mini-series; the world doesn't revolve around you, it's about how you deal with change.

The first and third parts of The Banner Saga have been successfully crowd-funded through Kickstarter. Refer to the following links for details on the campaigns (FAQs etc. can be found therein):