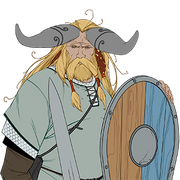 The Varl are a race of powerful, horned and bearded giants, having twice the height and girth of Humans. They are warlike but also have a fondness for mead and brawling. Only male, Varl are unable to reproduce and increase their numbers.

The Dredge are their ancient rivals and are instantly hostile on-sight. They warred against them during the Second Great War and allied with humans against them.

Their relationship with humans has been complicated, ranging from friendship to often hostility. The varls and humans fought against each other during the First Great War, but united against the newly emerged threat of the Dredge.

The Varl usually live in small communities, spaced from each other, or alone. For this reason, they are prone to develop a restlessness when living in proximity of other varl or humans. However, they are known to gather in large cities or in armies, especially during times of War. In these cases, they are ruled by a king, who is typically publicly accepted (or 'elected') after displaying surpassing valor. The Kings of the Varl are:

The capital of the Varl is Grofheim, with Einartoft coming in second.

Varl who are close knit enough to be family refer to each other as kendr. Being kendr to a Varl King is the equivalent of being an heir in historic hereditary monarchies.

Many of the varl are killed during the invasion of the northern lands by the Dredge with their strongholds and fortresses sacked. Hakon becomes the Varl king after the death of Vognir at Vedrfell and Jorundr at Einartoft. Some of the remaining Varl are led to safety in Arberrang by him and the Hero of Skogr.

In the battles of The Banner Saga, Varl appear as large units occupying a 2x2 block of tiles and having much higher stats compared to human units.

The Classes currently available for Varl units are:

In the multi-player game, Factions, players are limited to fielding up to two Varl in their team, regardless of class; no such restriction applies to the single-player game.