A War occurs when your caravan encounters a large host of hostile Dredge. Wars play out like regular battles (skirmishes), with some important differences. In a War, you can choose how to approach the confrontation, something that directly affects the difficulty of the battle and the caravan's casualties. See the following section for details.

A War always leads to casualties in your caravan's population (Clansmen, Fighters and Varl) that depend on: 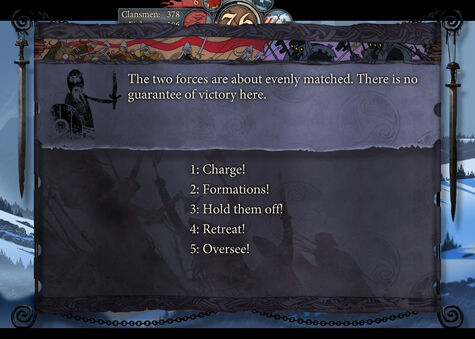 Each War can be approached with a different overall strategy, taking into account the number of enemies and your combatants (Fighters and Varl), the condition of your heroes and the state of your caravan (morale, population and supplies). The way you approach a War directly affects the difficulty of the battle as well as the casualties of your caravan's population. Below follows a description of the available options.

If you are victorious in defeating the first Dredge force, you will be given an option to either hunt down the remaining enemies or retreat before they regroup. The latter terminates the War, with a victorious outcome. Choosing to hunt them will lead to a second battle that, if won, will earn you more Renown, increase your caravan's morale, decrease the casualties and offer a chance of finding a random item as loot.

Be Warned! This second battle happens back-to-back, i.e. your units have the same stats and positions as they had at the end of the first battle (potentially injured), while a number of fresh enemy units spawn at random border-tiles of the map... Losing the second battle means a defeat in the War! You should only take-up these second waves if your units are in a good shape at the end of the first battle.